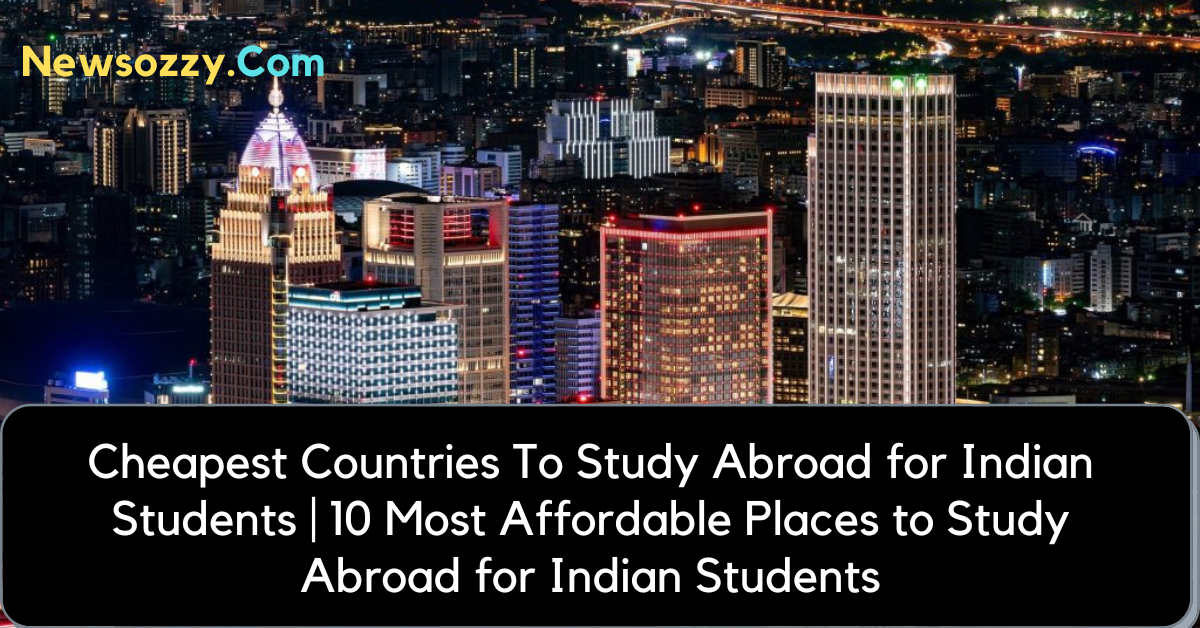 Studying abroad gives Indian students an entirely new outlook on their careers, gives them international experience, and enhances their appearance. However, more than 60% of the middle-class students in the country cannot afford to study abroad. While taking out loans or applying for scholarships are several options, not everyone is eligible for loans, grants, or scholarships. Education abroad can also be expensive- tuition fees, cost of living, medical expenses, and several other factors contribute to your expenses.

Low-Cost Countries to Study Abroad for Indian Students in 2022

Here, we have mentioned a few cheapest countries to study abroad for Indian students, which provide them with a vast area of opportunities at an affordable cost. So, that they can affordably get their master’s degree from abroad with best in class education and job opportunities.

While Germany has become known as a country where free education is offered by public universities, this is only partially true. Public German universities have waived off the annual tuition fee, as well as charged a minimum application fee and other processing fees. Despite all the costs like food, stationery, transportation, and other expenses, Germany still stays the cheapest country to study abroad at $8,400 per year.

Best courses to study in Germany:

Another European country to consider for higher education is Sweden. Some of the cheapest universities in Europe are in Sweden. The Swedish education system differs from that of many Asian countries, particularly in encouraging students to think critically, independently, and creatively. Based on these statistics, students in Sweden can manage to support themselves with a budget of about $8500 per year to cover accommodation, educational expenses, and food.

The best course to pursue in Sweden are:

Mexican universities are expensive compared to public ones, but the cost of living in Mexico is very low, with an average of about $9250 per year in the heart of the city and $6450 in the suburbs. Mexico offers exceptional educational facilities, but its affordable cost of living makes it one of the most affordable countries to study abroad.

Best subjects to study in Mexico

The Asian country offers more than 120 English-taught courses at more than 40 universities. It is also a popular destination for students wanting to learn Mandarin, which is why Taiwan is such an inexpensive study abroad destination, since the tuition fee is very reasonable in all the universities, and students can also get low-cost housing through their universities, further limiting expenses. Taiwan also offers Mandarin classes at some schools, making it a low-cost destination for foreign students.

Best courses to study in Taiwan

Among the cheapest places to study abroad, Austria has emerged as one of the best options for Indian students. The tuition fee at Austrian universities is relatively cheap for international students and they provide quality education. Also, students in Austria can likely manage their expenses under $10k per year if they manage their finances well.

The best Subjects to study in Austria are

Indeed, France does not rank so high as Germany in terms of affordable higher education, but it also makes the list of cheapest countries for studying abroad. While the cost of studying in France is almost free, it can be expensive to live in the popular capital, but if a student works out a budget, the cost of living in France falls somewhere around $10,430 per year.

Some popular courses to study in France are

It is a fact that Denmark, one of the happiest nations in the world, is also one of the richest countries in terms of higher education and universities. Denmark has a low crime rate and a low cost of living, which means that not only can students achieve quality education, but also they can manage their living expenses well under $10,200 a year.

These are the best subjects to study in Denmark

Students are expected to be proficient in one of three languages – French, German, and Dutch – for courses to be taught in English at Belgian universities, and part-time employment is an option for its students, lowering the cost of living in the country, According to a survey, the average cost of living in Belgium is about $10,700 per year.

Best Subjects to study in Belgium

Among the cheapest countries to study abroad, students are always willing to consider Russia for several reasons, the most significant of which is its relatively affordable tuition costs, along with the high quality of education offered by Russian universities. Besides affordable educational costs, studying the Russian language can help you save extra on living expenses. The minimum average cost of living in Russia is $11,700 per year.

Best Courses to pursue in Russia

All Nordic countries are in the top few cheapest countries in the world to study abroad in terms of education. Norwegian public universities provide free education to their students, making it a practically no-fee education country. However, Norway’s living costs are incredibly high, with an average of $12,000 per year.

The best Subjects to study in Norway are

1. Is Germany Cheap to study in?

It is not only possible to study for free in Germany, it is also an affordable country, The average cost of living for students is 700-1,000 EUR/month, including accommodation. It stays to be one of the cheapest countries and in many universities, the tuition fee is free of cost.

2. Is College fee-free in Canada?

3. Is it better for Indian Students to Study Abroad?

Scholarships and funding are available for higher studies abroad, so it is a better decision to go abroad for your studies. Alternatively, you can complete your undergraduate degree in India, find a job, work for three to four years, save money, and fund your postgraduate degree abroad.

4. Which Country is easy for the students to migrate to?

The world is opening up, and today Indian students can gain access to a foreign degree without having to exhaust their limited financial resources. Many Indians dream of studying abroad and by doing some research, you will recognize that there are several options to accomplish that goal.

Here we have mentioned a list of countries where the students can study their desired course and get an abroad degree at a very affordable cost, without exhausting all their finance. Go through other articles on importance of discipline in Students life.