During the global pandemic, when the world shut down and isolation and quarantining came into the picture of the otherwise outgoing and most social species of the planet that are humans, there was a rise in usage of the various kinds of social media and communication-related platforms as well as OTT platforms, delivery apps, games, etc

Coronavirus pandemic is considered the pathmaker for applications like Discord. It transformed from a simple entertainment app to a vital lifeline that was allowing people to connect with friends and family. That too while being in the complete safety of their houses. As I mentioned earlier, apps like Netflix, zoom, and many others are no longer focused on as just work, organizational, or entertainment sources. They have now become man’s key tools for socialization.

How does the Discord make the Big Bucks?

Discord is a worldwide used application or rather a communication platform. It allows its users to join servers and interact with the different people that are part of that server. This app was previously used and dominated heavily by gamers. But after the global pandemic, it has seen a rise of users joining in regardless of if they are gamers. This platform is available on all devices, which means anyone can access the platform. That is regardless of if they have an android device, iPhone, or MacBook. It can also be accessed on Playstations, Xbox, and PC devices.

This app has seen a tremendous rise in the number of users and fame during the pandemic. The platform has been a part of our society since 2015 when it was founded by Jason Citron in the city of San Francisco. It is considered the home for all great tech startups. The company has grown as one of the world’s most prominent chat apps. It hosts over 100 million active users that have been spread across about 6.7 million servers.

What Exactly is Discord?

Now discord is a chat application that is specifically tailored for its audience which is the video game players. This platform has been gaining users tremendously because it supports communication via text, voice chat as well as video calls, and its diverse availability on all kinds of devices like iPhones, Android, PCs, PlayStation, Xbox to name a few.

This program also allows the users to organize themselves into communities that are known as “ servers” on this program. It is a function similar to slack groups. Slack is a messaging application that also allows its users to engage in communication via means of chat, phone, or video.

These discord servers are filled with various channels which can be used to discuss and coordinate on various topics. There are two kinds of servers present on the program that are public and private. These public servers can be easily accessed via a link but on the other hand, the private servers require invitations and approvals to maintain privacy. Any user can join a maximum of 100 servers and every server receives a maximum of 500 channels.

In case you are tired of servers which are group chats, the user can interact privately with each other on a private chat like any other communication platforms example: WhatsApp. Another factor that attracts users to this program is that this program is furthermore integrated with platforms like Spotify, YouTube, GIPHY, etc which allows the users to enjoy third-party content on discord easily.

The discord population was previously dominated by gamers but now it has communities ranging from dance classes to book clubs and debate teams because users find the app easy to use and discuss any topic or organize events. The company stats shares tell us that the program now is a host to over 100 million active users which spend around 4 billion minutes conversations on more or less 6.7million active servers.

Read More: How to Make Money on Social Media

As we know the core product of discord is free to use which means the users can join this program and utilize its features without having o pay for it which is what allowed the company to get users at a rapid pace.

In order to run any company, funds are necessary. It is why it had to eventually figure out a revenue model. As startups usually experiment with the various revenue models. And some ideas might work well for them while the others probably would not. Discord launched its merchandise store that sold Discord-branded clothing. Unfortunately, they had to shut it down after 2years of operation. In 2017, Discord introduced its Nitro package which became a source of their income. 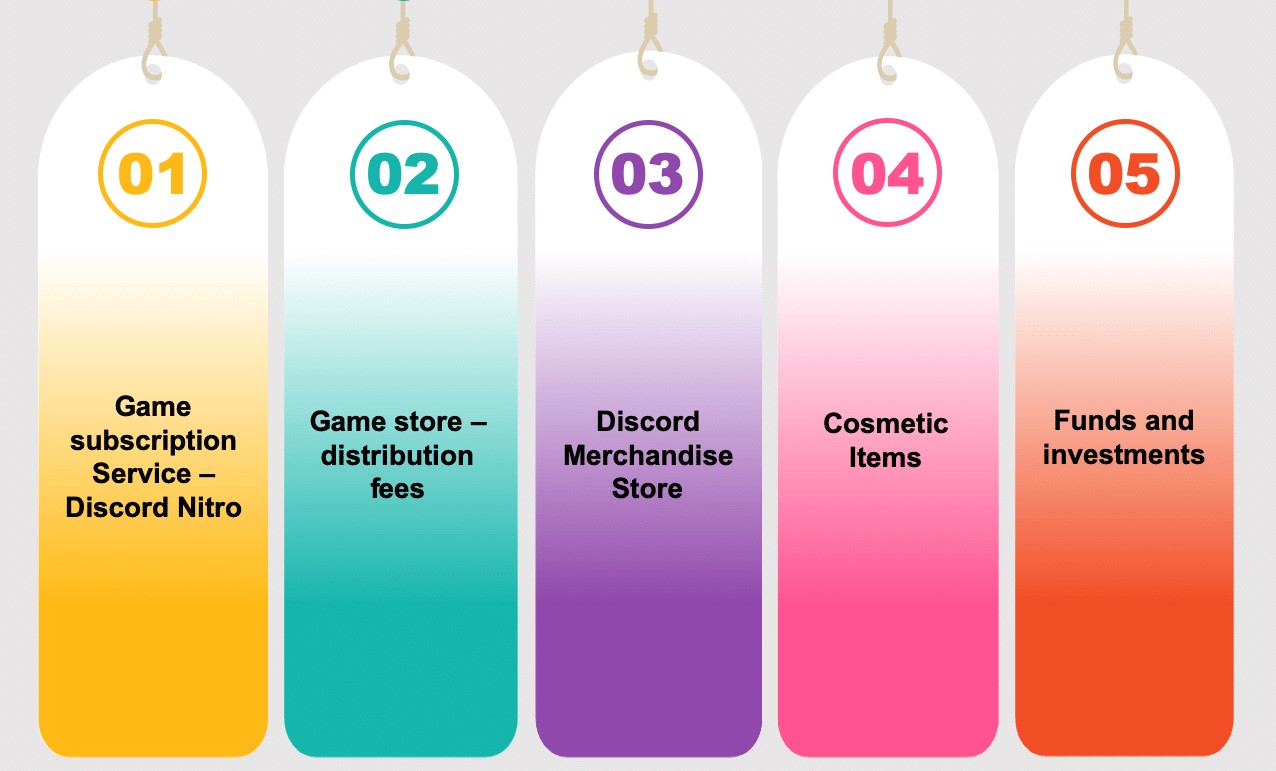 This premium Nitro can also be tested for free for the first 30mins just like the OTT platform Netflix which championed having a faultless or frictionless experience and pricing flexibility. This subscription can also be canceled anytime.

In 2018, to compete against the likes of the Stream. It is an online platform that allows users to play, purchase, distribute as well as discuss video games) Discord launched its own gaming store. This game store allowed the premium users (Nitro subscribers ) to get access to exclusive games like Dead cells or Into the Breach

But this store never really grew and was eventually phased out after just a year. Discord then pivoted into a new model that partnered up with game developers. It is believed to sell games exclusively on its servers. Developers would get their servers verified. And then later, Discord would promote the game as well as the server on the platform in order to grant the developers the required exposure.

This way Discord made money whenever a game would be sold on its servers and the company would take a 10% cut from each sale. For example: for a game that costs $14.99, Discord would get $1.99 as a commission.

Server listing is a feature that allows the users and communities to up the functionality and performance of their servers. There are three levels that the servers can be boosted up to and they include the below-mentioned perks:

All these features are available on level 2 along with the features present in Level 1.

A Server boost costs about $4.99 per month and Nitro users receive a 30% discount. To unlock level 1 two users have to pay the subscription fee. Level 2 requires 15 boots while level 3 requires 30 boots.

Note: The premium features will be applicable to every one part of the server regardless of whether they will be paying for the server boosts or not.

Crunch Base is a platform that gives out information about investments, mergers, acquisitions, and funding. This is in private and public companies. Discord raised a total of around $479.3 million across 11 rounds of its venture capital fundings.

Spark Capital, Tencent, Index Ventures, Benchmark, Accel, General Analyst, and many more are notable investors of Discord. During the company’s funding round that was announced in December 2020. The program was valued at 7 billion which represents a 100% increase from its $3.5 billion valuations in July 2020.

I hope this article helped answer your queries about the earnings of the program Discord. Let us know in the comments if you have any queries or suggestions regarding the same.