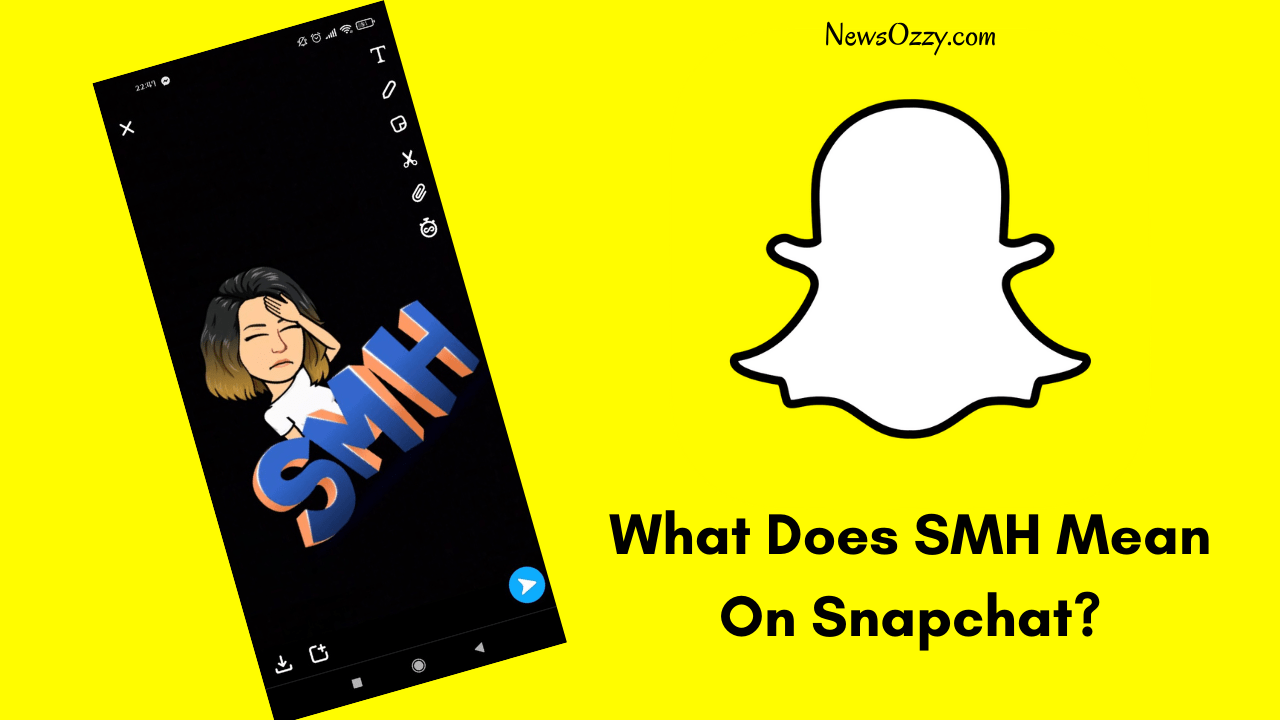 What Does SMH Mean On Snapchat: The world is changing and the way we communicate is changing too. This is especially true on social media apps. Using shortcuts and abbreviated messages has gotten quite popular. With increasing online users, not everyone understands what these acronyms and initialisms mean especially on Snapchat.

These terms have made their place in our daily vocabulary, especially during texting. Thus, in this article, we will tell you everything you need to know about the term SMH and how to use it. 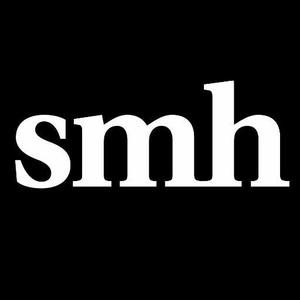 Before we go any further, you can also check out the video attached below to understand what SMH means and how to use it.

What Does SMH Mean On Snapchat? Various SMH Full Forms

On Snapchat, along with everywhere else, the most common full form of SMH is “Shaking My Head” or “Shake My Head.” It is used to express disappointment or disbelief in the face of what’s perceived as unreservedly obvious stupidity or exceeding obliviousness.

It is to show surprise to a situation that you can not believe or make sense of. We can visibly react, make a face and shake our head to react in real life but that is not possible while texting for obvious reasons. Showing emotions and using body language is considered a huge part of communicating with someone.

Thus, we use several acronyms and initialisms to do so while typing. SMH is one of them. It basically tells someone how you feel about something that was just said or occurred.

You can use it when you want to react to something that left you lost for words, and the only thing you can think of doing is shaking your head. It is not a very serious initialism though. A lot of people use it to react to something silly or tease the other person as well. Some also use it to show exasperation. As with anything really, SMH is too used in different contexts, be it serious or teasing.

Some people think SMH means “So much hate.” Since some people are using it that way, we can not say it’s wrong but it is not the most common version either. Most likely, the person who is using it with you means to say “Shaking My Head” instead of this less popular meaning. SMH as “so much hate” is an appropriate response only to a hurtful or uneducated remark.

When To Use SMH

SMH is an internet slang and an example of textspeak. You should not say it out loud or use it in verbal, face-to-face conversations. Most of the time, you will only see it across social network posts and in text messages. Other than this, you can use it pretty flexibly.

You usually use it at the beginning or the end of a sentence, but you can even use it in place of a comma or full stop.

How To Use SMH On Text?

You can use SMH as a response to someone else’s behaviour, a situation, or an event that took place. It typically involves something that you want to respond to but are at a loss for the right words to use. In that situation, the only appropriate response is shaking your head. Hence, you can use SMH as an online response anytime you might want to physically shake your head at something.

There aren’t too many rules to the phrase. You just have to know that it is used to express disgust, disbelief, shock, or disappointment. You could even use it for a joke, just like you would teasingly shake your head for a laugh in real life. Just know that some people might not know what it means as well, like adults or people who don’t use the internet and social media a lot.

Read more: What Does SFS Mean On Snapchat? How To Use It?

The term SMH was first seen on Urban Dictionary during the early 2000s. Given below are some posts posted on the website explaining its meaning. 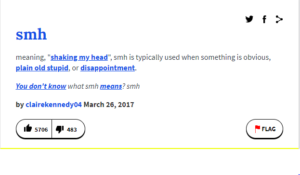 Image Description- SMH means “Shaking my head,” smh is typically used when something is obvious, plain old stupid, or disappointing. 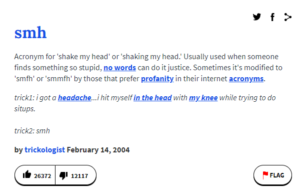 Image Description- Acronym for ‘shake my head’ or ‘shaking my head.’ Usually used when someone finds something so stupid, no words can do it justice. Sometimes it’s modified to ‘SMFH’ or ‘SMMFH’ by those that prefer profanity in their internet acronyms.

trick1: I got a headache…I hit myself in the head with my knee while trying to do situps.

The Etymology of SMH

SMH was first added to the Urban Dictionary in 2004 with an identical meaning to the initialism’s current most popular meaning. Nobody exactly knows where the phrase came from. Some believe it was probably devised around the same time as the phrase “facepalm.” It is a similar internet expression that was first uploaded to the Urban Dictionary around the same time as SMH.

Like “facepalm,” SMH slowly made its way into the common parlance. It started being used in memes and reaction GIFs and reached peak popularity during the early 2010s due to social media websites like Facebook and Tumblr.

But lately, there has been a decline in its popularity. This is due to the use of GIF tools like GIPHY, which are now integrated into most social media sites, messengers, etc. You can only convey so much by using the phrase SMH by itself. Whereas, a GIF can communicate feelings of surprise, disappointment, disgust, teasing, etc in a much better, expressive way.

Read More: What Does HMU Mean On Snapchat? Why Do People Use It?

Now we know, SMH stands for “Shaking My Head” or “Shake My Head,” most popularly. Sometimes, not so popular “So Much Hate.” You can use it in text and social media to show exasperation, surprise, disappointment, disgust, shock, etc.

If you have any more doubts about what SMH means on Snapchat or how it works, please post them in the comments section. Tell us if this article helped you in any way and if you liked our article, be sure to check out our other works as well!

Keerti Agarwal is a Freelance Content Writer. She writes guides, both short and long-form. She enjoys reading and exploring new things. She is open to learning and gaining new experiences.