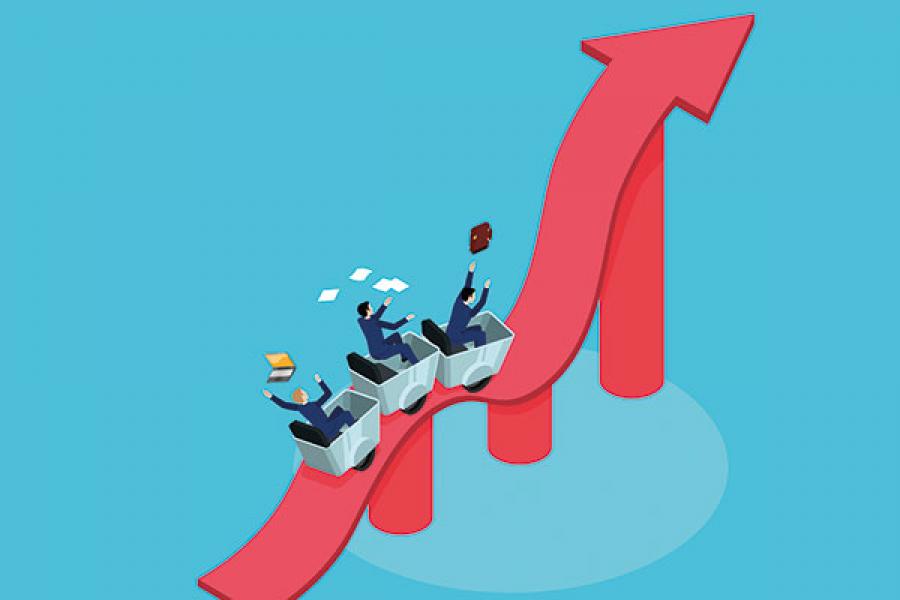 The panic that gripped the stock market last week, as Covid-19 spreads across the world, is expected to spill over to Monday. With the US Federal Reserve’s efforts to pacify investors on Friday failing to stop the Dow Jones from plunging 1.4 per cent, analysts expect the market to slide further. The Nifty could drop by as much as 5 per cent from current levels if the index falls below the psychologically crucial 11,000-point level, they said.

The Nifty tumbled 3.7 per cent to 11,202 on Friday, posting the biggest single-day fall in four and a half years on Friday.

Last week, the benchmark indices — the Sensex and the Nifty — declined about 7 per cent, their biggest weekly drop since August 2009. Investor wealth was slashed by Rs 11.03 lakh crore.

India’s monitoring and quarantine system has kept the disease at bay so far but it may not be able to withstand the effects of a global downturn if Covid-19 continues to spread.

“I don’t think there is a large economic impact as such in India but the impact is more on the market, which essentially reflects the market taking a riskoff approach, given the heightened uncertainties,” said Sanjeev Prasad, cohead, Kotak Institutional Equities.

While US indices pared losses after Federal Reserve chair Jerome Powell’s assurances that the central bank would take action if the US economy takes a hit from the coronavirus, they still ended weak, suggesting the market is expects aggressive rate cuts in 2020.

“The fundamentals of the US economy remain strong,” Powel said. “However, the coronavirus poses evolving risks to economic activity. The Federal Reserve is closely monitoring developments and their implications for the economic outlook. We will use our tools and act as appropriate to support the economy.”

Wall Street has interpreted the statement as signalling a rate cut in the March 17-18 meeting but it’s not anticipating one before that. The extent of the rate cut at the meeting and the accompanying commentary will be crucial for the market.

Mohamed El Erian, chief economic adviser at Allianz, said in a tweet, “Many will be relieved to finally hear from him (Powell), especially given threats to the wellfunctioning of markets. What they won’t get is a Fed solution to the economic sudden stops.”

Worries about a weakening global economy caused oil to post one of its worst weekly losses since 2008. Equity markets across the Middle East slumped in response to the drop in oil prices with Brent Crude falling below $50 a barrel last week. Saudi Arabia’s main index fell 3.7 per cent. Saudi Aramco fell to its lowest level since an initial public offering in December.

Chinas’ official manufacturing PMI (purchasing managers’ index) in February was 35.7, worse than the lowest reached previously during the global financial crisis during 2008-9 when the PMI was at 38.8 – 45.3. ING said China’s weak manufacturing PMI will shock the market on Monday.

At home, about 60 per cent of BSE 500 stocks are trading below their longterm average of the 200-day moving average — a key sentiment indicator — amid the rout in global markets as investors fret that the spreading global pandemic could lead to a recession worldwide. When the majority of the top stocks are below the 200 DMA, it suggests sentiment is bearish. Technical analysts said it will be critical for the Nifty to stay above 11,000, failing which the index could fall to 10,700.

The torrent of foreign institutional selling seen last week is making investors skittish about the market’s near-term prospects. Foreign investors have sold Indian equities to the tune of Rs11,200 crore in the past five days amid growing aversion to riskier emerging market equities. Analysts said stocks with higher foreign investor holdings will be most vulnerable to further declines if their sell-off continues.

There have been more than 83,000 coronavirus cases across the globe, according to news reports, resulting in factory closures and profit warnings by companies such as Disney, Apple, British Airways, Microsoft and Qualcomm.

SBI Cards IPO ticks all boxes, but timing may be an issue